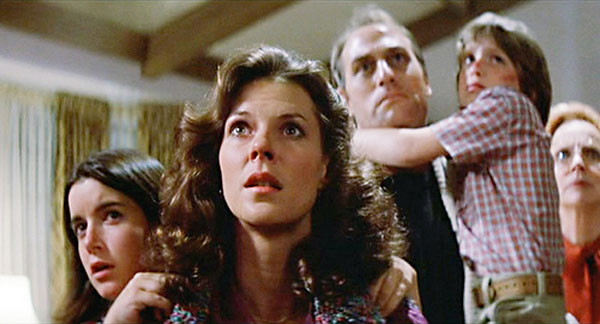 I was listening to the She Kills podcast today on my daily walk. I’m three episodes deep and so far it’s everything I hoped it would be: smart women–actors, writers, directors–having deep conversations about their favorite horror films and their own work. Episode three featured Clarke Wolfe and Barbara Crampton on “The Final Girl” trope. The Final Girl is the last girl standing in the horror movie, the one who confronts the killer and lives to tell about it. I love my Final Girls–and agree with Crampton that Nancy from Nightmare on Elm Street is one of the best. But Wolfe also touched me with her description of JoBeth Williams as Diane Freeling in Poltergeist, which remains my favorite movie of all time. I recently rewatched Poltergeist and was struck by how scary it still is, but also how comforted I was to re-enter that world. I watched it so many times as a kid that the Freelings house felt more like home to me than the house I live in now. And Williams as Diane Freeling IS my mother, playfully thrilled by the possibility of a supernatural disturbance in her home until it threatens to take from her every person she loves. That was Wolfe’s observation: Diane has to persist against an unstoppable supernatural force that wants to take everything she loves from her. And she conquers it. She saves her family. And in the first movie, she even saves the monsters. She helps the troubled souls who have tortured her family to pass on to the other side. Wolfe pretty much explained to me my own deep affection for Diane Freeling, my favorite Horror Movie Mom.

Listen to the episode here.